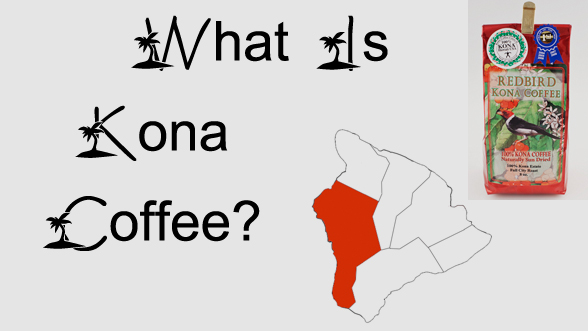 What is Kona Coffee?

What is Kona Coffee?

When coffee is referred to as ‘kona coffee’, it means coffee that’s grown in the North and South Kona districts of Hawaii. The 2-mile long stretch of land is informally referred to as the “kona coffee belt” and is home to over 600 coffee farms.

Initially the kona region was the only major coffee growing region in the United States. But in the past twenty five years (due to the collapsing sugar cane industry) several coffee farms have started up on other Hawaiian islands. These other regions like the Ka’u district (south of the Kona district), Maui, Kauai and even Moloka’i have begun growing and selling coffee.

Click here for a guide to all the coffee regions in Hawaii.

A Quick History of Kona Coffee:

The history of coffee in Hawaii dates back 200 years (they recently celebrated the 200th anniversary of coffee in Hawaii). But the coffee wasn’t brought to Kona until 1828, when a monk by the name of Reverend Samuel Ruggles wanted to make his monastery self-sustaining. Various challenges like drought, infestations and the emerging sugar plantations all prevented the coffee industry from taking off.
Most of the coffee grown in the Kona region is on land owned by the Kamehameha Schools Bishop Estate (KSBE). This trust was created by the last descendant of King Kamehameha, Princess Bernice Pauahi Bishop. She wanted the income generated from leasing this land to supporting schools here in Hawaii (as well as a college scholarship program). That means when you purchase 100% kona coffee you’re supporting American coffee farmers, who in turn are supporting the education of schoolchildren!

You can read more about the history of kona coffee here.

There are several factors that make kona coffee unlike any other coffee region on the planet.

Most regions grow their coffee at 5,000+ feet or above, but the Kona coffee growing region goes as low as 800 ft and ends at 2,300 ft. Why is this so?
One reason is that clouds settle over the crops in the afternoon, providing a natural shade for the coffee to protect it from the harsh midday Hawaiian sun.
Another reason is that the steep volcanic slopes created an ideal drainage system for rain. All this leads to conditions that resemble much higher elevations in other parts of the world.

While most coffee regions use mechanical harvesters to pick coffee cherries, the steep volcanic slopes make these Harvesters impossible to use. As a result, all kona coffee is hand-picked by real people.

Since there are over 600 farms with different growing, processing, and roasting methods, the coffee from this region isn’t known for a particular flavor. Whereas you know that a Kenyan coffee will be citrusy and a Guatemalan coffee will have cocoa notes, with Kona the flavors will vary from farm to farm.
However, since the coffee in Kona is grown in the same volcanic slopes of Mauna Loa and Hualalai, There are some general characteristics you can expect from each cup of kona coffee. One is its distinct smoothness. You can drink a whole french press of Kona without thinking about it. Most kona coffees tend to have a caramelly taste upon the first sip, and it’s not uncommon to find citrusy or floral aftertaste in your mouth.

Click here for our picks for the best kona coffees.

Current Trends and Challenges in the Kona Coffee Industry

Some may not know this, but when you purchase Kona Blend coffee, the package contains less than 10% actual Kona coffee beans (with the remaining 90% made of up cheap, low quality beans). Kona Coffee farmers are fighting to create labelling protections of the ‘Kona’ brand, in a similar way California has laws to make sure wines labelled ‘Napaa valley’ are 100% from the valley.

So far it’s still legal to sell ‘Kona Blend’ coffee, but you can protect yourself and help farmers by making sure the coffee you purchase says 100% Kona Coffee on the label. Several retailers like Trader Joe’s will only sell 100% kona coffee in their stores.

The coffee borer beetle exists in almost every coffee growing region in the world, and it is devastating to coffee crops. The kona region remained untouched until 2010 when university scientists first discovered it. This year the beetle has wiped out about 20% of the crop while farmers learn how to deal with it. It may result in a supply shortage/price increase for this year and possibly the next year.

Coffees of Hawaii: An Island Guide
What is Peaberry Kona Coffee?
Kona Coffee K-Cups and Pods: The Ultimate Guide