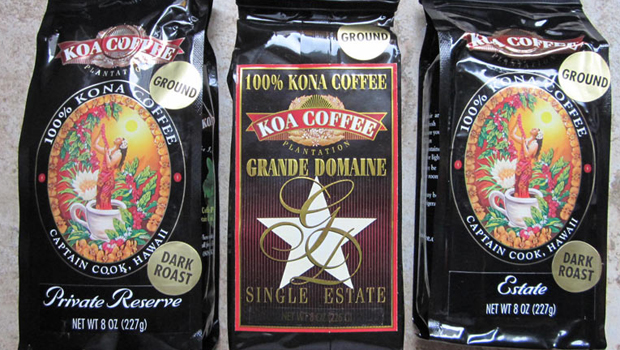 Koa Coffee Review: About the Coffee

The name “Koa” refers to a native Hawaiian Koa Tree. It naturally grows in the volcanic rock of the island (much like how the coffee trees all grow on the side of a volcano!). It has a naturally reddish color which is thought to come from the volcanic rock. It’s strength meant that it was widely used by native Hawaiians and is integral to their culture. Much like how the kona coffee industry is now an intertwined and integral part of Hawaiian society.

The first big moment in the coffee company’s history came when it was named the “Best Coffee in America” by Forbes Magazine in 2001. The very next year it won best coffee at the Gevalia Kona Coffee Cupping Competition.

The Koa Coffee plantation is also vertically integrated: meaning that they grow, process and roast their coffee all on the same site. They have a wet-mill facility imported from Colombia, as well as a dry-mill imported from Brazil.

For this review I’m going to be reviewing the popular Kona Peaberry Coffee. There are plenty of other types of Koa Coffee and will add those reviews as I try them.

The coffee is medium bodied, meaning that it doesn’t stay on the tongue for long. In fact, the coffee is deceptively smooth: I would find myself pouring a second cup without even thinking twice. The coffee is subtle, sweet, with an acidy aftertaste that is the signature of most peaberry coffees. This coffee makes for the ideal after-dinner beverage, and pairs well with almost any sweet dessert you can think of. I tried it with a lemon danish and it was amazing. My mouth is watering just thinking about it.

Koa Coffee gets top marks for their freshness factor. The coffee is roasted the same day that the order is received and then shipped out the next day. That means if you order Monday morning, it will ship Tuesday and it will be at your door by Friday. When I got my order the next morning I opened it and the aroma was amazing. I highly recommend ordering your coffee whole bean and then using your own Burr Grinder at home to get the most out of these coffees. If you don’t have a grinder, then visit any local coffee shop and they will grind it for you (free of charge).

Overall I was mightily impressed with Koa Coffee. I haven’t seen it in any grocery stores in Kona, and indeed Koa seems to be focusing on being a mostly online gourmet coffee company. But compared to other kona peaberry coffees, it was actually my favorite so far. It has a soothing smoothness that relaxes you, and definitely makes you want to grab something sweet to pair with it. Right now they have a fan in me, and I’ll keep ordering different types of Koa roasts and posting those reviews here.

Koa Coffee sihps with UPS by default, however you can choose which shipping method you want. Koa promises that your delivery will get there in 3-5 days on the west coast, and then 4-7 on the East Coast. If you order from Canada then the default shipping method is ‘USPS Priority’.