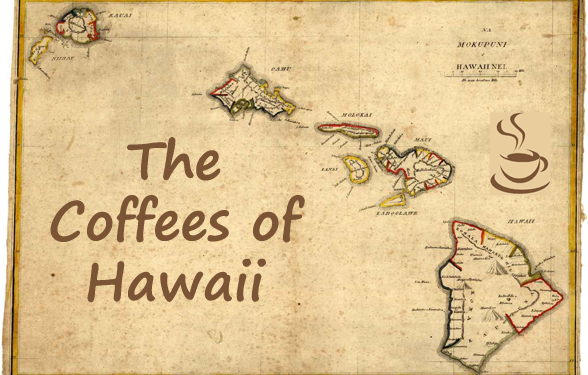 Coffees of Hawaii: An Island Guide

The Coffees of Hawaii: Exploring Hawaii’s Coffee One Island at a Time.

You’ve probably heard the terms ‘hawaiian coffee’ or ‘kona coffee’ before. What most people don’t realize is that every major Hawaiian island has a coffee growing region. In addition to Hawaii (the Big Island), there are coffee plantations on Maui, Kauai, Oahu, and even the tiny island of Molokai! This is your guide to all the coffee regions of Hawaii. We will also highlight some of the best coffee from each island!

Coffee on the Big Island:

Most Big Island coffee farms can be divided into two regions: the Kona and Ka’u districts.

The most famous and well known coffee growing region is Kona. The ‘Kona Coffee Belt’ consist of over 800 coffee farms in the North and South Kona Districts. The coffee farms are all situated on one of two volcanoes: Hualalai or Mauna Loa. The climate conditions in Kona provide an excellent location for growing coffee: mineral rich volcanic soil, and afternoon clouds that provide natural shade.

Even though the kona coffee belt is the largest coffee growing region in Hawaii (3,000 total acres), it is one the smallest coffee regions in the world.
The flavors of kona coffee vary widely based on each farm’s growing, harvesting, processing and roasting methods. But generally kona coffee is known for having a complex flavor profile: a sweet aroma, with floral and nutty notes, and a silky smooth finish.

Whereas kona coffee is grown on the western slope of Mauna Loa, Ka’u coffee is grown mainly on the south slope of the same volcano. The climate conditions are remarkably similar to the kona district. It has the same mineral-rich volcanic soil and shade providing cloudy afternoons.

Whereas coffee farming in Kona has been going on for more than 100 years, Ka’u coffee is the new kid on the block. After the last of the sugar plantations closed down in 1996, the land was converted to grow coffee. The trees used in the Ka’u district are the same Kona Typica trees, and indeed much of the processing is done in Kona processing mills.

Oahu has precisely one coffee farm: Waialua Estate. It comprises a total of 155 acres of land on the north shore of Oahu. It is owned and operated by Dole, which has a very large pineapple plantation on the North Shore as well. The coffee farm is built on an old sugar plantation at an altitude of 700 feet. If you visit there they have daily walking tours and a gift shop. They also have a cocoa plantation on the estate as well.

Maui coffee is grown on the West Maui mountains. These areas are some of the wettest places on Earth. The Maui coffee industry has been rapidly expanding, as it has grown from only a few farms in 2005 to over thirty today. The coffee yields in the Ka’anapali area were reported to be up 40% year to year in 2012.

Like most Hawaiian coffee regions, the Kauai coffee plantation started out as a sugar plantation. In the mid-1980’s the transition to a coffee plantation was complete. The coffee production in Kauai is pretty much one plantation, aptly named “Kauai Coffee”. The flavor of Kauai coffee tends to be mellow and delicate. They also have many flavored coffees you can sample.

Molokai is a sparsely populated island off the west coast of Maui. It has only a couple of resorts, as well as some excellent snorkelling. They do have a robust coffee farm industry, however. While the island doesn’t have the higher altitudes like Kona, Molokai is capable of producing some very tasty, nutty and sweet coffees.

There you have it! As the coffee industry in Hawaii continues to explode, hopefully we will see more of these coffees in coffee shops and grocery stores across North America.